Welcome to USA Racketlon! We are a group of Racketlon enthusiasts located throughout the USA that actively play in different Racketlon tournaments throughout the world and desire to bring the Racketlon passion to the US.

This website exists to educate people about Racketlon and share detail about various US events.  If you are interested in playing, hosting or learning about Racketlon, you are in the right place.

It is an amazing sport for all racket sports enthusiasts. In Racketlon, you play your opponent in TABLE TENNIS, BADMINTON, SQUASH, and TENNIS. Each sport is played to 21 points: the player with the most points across all four sports wins the match. Every point matters! All Racketlon tournaments have classes for all abilities and ages, they are open to everyone: from beginners to elite players.

Racketlon began in Finland over 30 years ago and has continued to grow across the globe. Some say Fred Perry was the initial pioneer of Racketlon. He was the world table tennis champion in 1929 and won Wimbledon in the 30’s.

In the US there have been a number of local tournaments over the years. Cliff Wenn organized a tournament at the Maugus club in 2007. Tim Bacon, former squash coach at Smith, hosted a small “taster” tournament in 2009. Shona Kerr, head squash coach at Wesleyan University, even has a Racketlon class! A tournament was also organized at the University of Oregon in 2012 as a fundraiser.

The first officially sanctioned tournament in the US was held in April of 2017 at Smith College in Northampton, MA. The tournament was held for its 3rd consecutive year in 2019. Check out the most recent results. It will be back in April 2020!

Where is Racketlon played?

Racketlon is popular in Europe and tournaments are held year round across the world. Individual countries have there own tour events. Check out the 2019 World Tour to find an event near you! Racketlon is also expanding into new markets, with ongoing tournaments in India, Thailand, and Hong Kong. 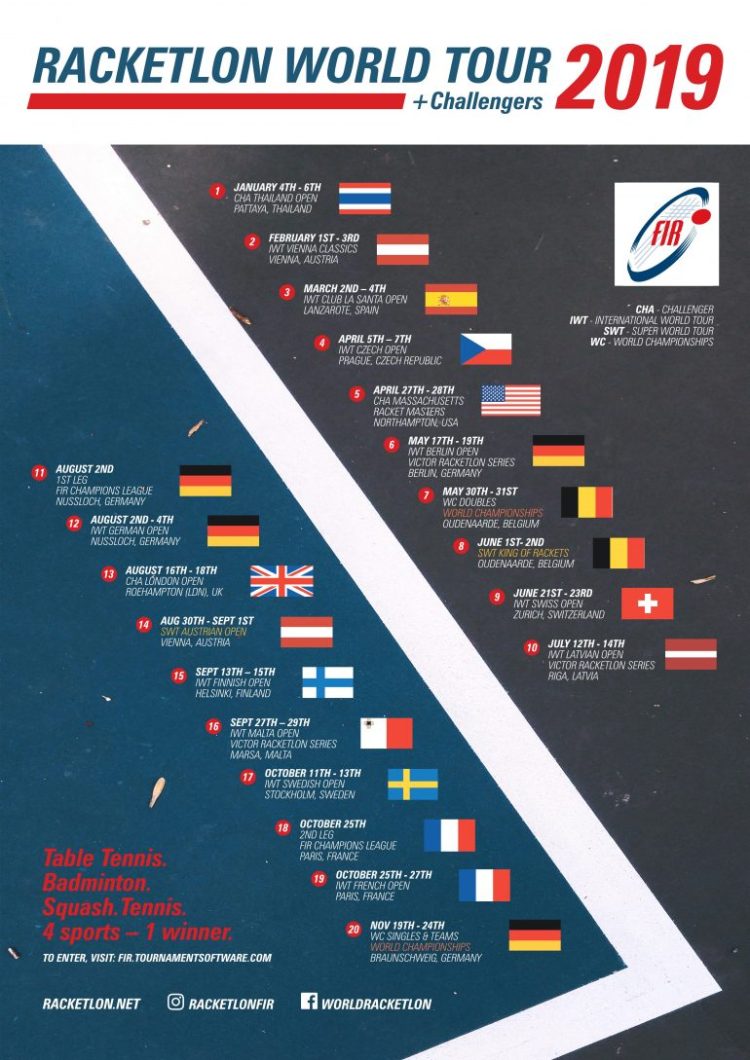 Racketlon was featured in the WSJ, check out the video.

Hong Kong is doing an excellent job of growing the sport.

Judy Murray, mother of Andy and Jamie Murray was part of the Scottish national team, which won bronze in the 2002 World Team Championships.